Groundwater is any water found beneath the Earth’s surface. Despite being difficult to visualize, groundwater makes up a significant portion of the Earth’s water.  When rain falls to the ground, the water does not stop moving. Some of it flows along the surface in streams, rivers, and lakes; some of it is used by plants; some evaporates and returns to the atmosphere; and some sinks into the ground.

Groundwater exists and flows within the small spaces between soil particles and fractured rock.  The area where water fills these spaces is called the saturated zone.  The top of the saturated zone (called the water table) may be only a foot below the ground’s surface, or it may be hundreds of feet down.  The water table may be shallow or deep; and may rise or fall depending on many factors.  Groundwater is unevenly distributed underground in both quality and quantity.

Groundwater doesn’t flow like an underground river, but it is stored in - and slowly moves through - layers of soil, sand, and rock (called aquifers).  Typically composed of gravel, sand, sandstone, or fractured rock, aquifers allow large underground reservoirs of water to accumulate.  Depending on the depth of an aquifer, the size of the spaces in the soil or rock, and how well the spaces are connected, groundwater can creep along as slowly as a few centimeters a century, or move as fast as several feet a day.

How do we get groundwater? 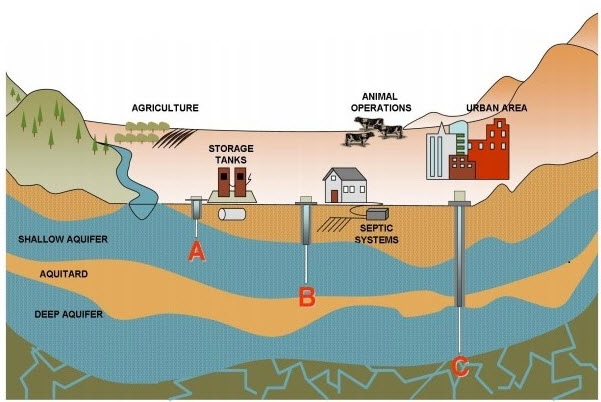 Water in aquifers may be brought to the surface naturally through a spring, or can be discharged into lakes and streams. However, most groundwater is brought to the surface by pumping it through a well (which draws the water like soda through a straw) that is drilled into the aquifer.  Wells come in different shapes and sizes, depending on the type of material the well is drilled into, the depth to the aquifer, and how much water is being pumped out. There are three basic types of wells:

Some wells (called artesian wells) do not need a pump because the natural pressure is high enough to force the water up and out of the well. 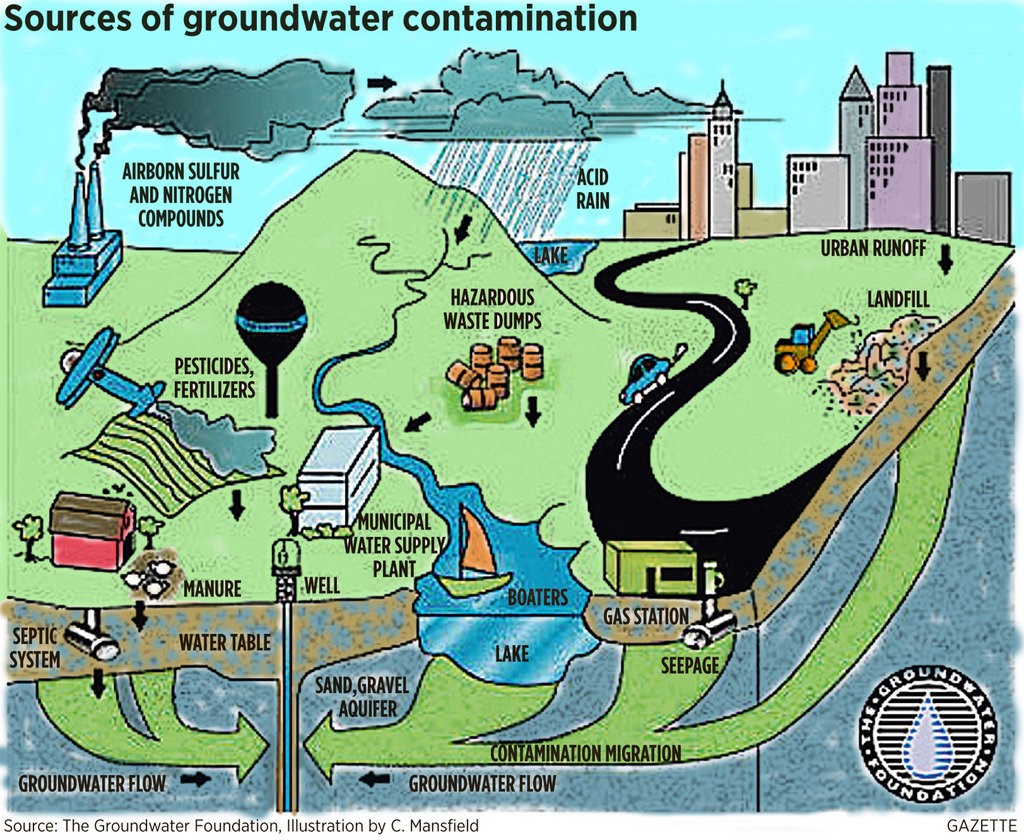 While surface water quality varies due to erosion, runoff, pollution, plant matter, animal waste, and other possible contaminants, groundwater quality is generally more stable.  That is because an aquifer’s pore spaces act like a coffee filter, trapping sediment and other particles (e.g., the “coffee grounds”, such as bacteria), naturally purifying the groundwater.

However, this doesn’t mean that groundwater can’t be contaminated.  Groundwater quality is related to several factors including geology, climate, and land use.  Many naturally occurring chemicals in groundwater come from dissolving rocks, soil, and decaying plant material.  In other cases, human activities at, or near, the surface of the earth can increase the concentration of naturally occurring substances like salts, minerals, and nitrates.  Deliberate disposal of waste (such as at landfills, septic tanks, injection wells, or storm drains) can impact groundwater quality.

Groundwater is one of California’s greatest natural resources, making up a significant portion of the state’s water supply, and serving as a buffer against the impacts of drought and climate change. During a typical year, groundwater makes up approximately 40 percent of California’s total water supply, and makes up to 60 percent (or more) during dry years. Groundwater is a major source of the state’s drinking water supply; approximately 33 million Californians - including almost everyone who lives in rural areas - use groundwater for drinking or other household uses (either from a public water supply or a private domestic well). Groundwater is also used in agriculture to irrigate crops, and in industry and manufacturing for cooling and rinsing. Additionally, groundwater replenishes streams, creeks, rivers, and wetlands that support wildlife (including threatened and endangered species). Groundwater is released slowly, which helps moderate stream temperatures and flows, providing critical habitat and flows for fish spawning and other wildlife.

Because groundwater is not easily visible, it is often taken for granted, putting important drinking water and irrigation sources at risk of contamination or going dry. Overuse, biological contaminants (e.g., manure and septic systems), and industrial pollutants (e.g., pesticides, petroleum products, and industrial solvents) can all threaten groundwater supply and quality. Groundwater pumping can locally exceed recharge from rainfall, percolation through streams, and other sources. Excessive groundwater pumping can overdraft aquifers, emptying them faster than natural systems can replenish them. Overdraft can result in wells going dry, saltwater intrusion, depletion of surface water supplies, and cause the land to collapse (i.e., subsidence).

Learn more about the hydrologic cycle, groundwater uses, and threats to groundwater (such as pollutants and overuse) from the following resources: