Domestic well water is for private use and consumption, typically by single family homeowners. Although its quality is not regulated by the State of California, private domestic well water is a concern, to local health and planning agencies, and to State agencies in charge of maintaining water quality.

The GAMA Domestic Well Project samples domestic wells for commonly detected chemicals, at no cost to well owners who volunteer when the project is active in their county. Results are shared with the well owners and used by the GAMA Program to evaluate the quality of groundwater used by private well owners. The Domestic Well Project has sampled six County Focus Areas in California as of 2011, and is currently on hiatus pending funding. See a listing of all Domestic Well Project Reports. Please contact GAMA if you have any questions at GAMA@waterboards.ca.gov.

The GAMA Domestic Well Project tests for chemicals that are most commonly a concern in domestic well water:

Additional chemicals of concern occur in some areas of California. GAMA has previously sampled for:

There have been six county focus areas sampled to date:

»»  View a map of the Domestic Well Project Focus Areas

The focus areas are chosen based upon several parameters in close coordination with county agencies. The State Water Board incurs the cost of sampling and analyses.

The results from sampled domestic wells are compared to State Water Board Division of Drinking Water (DDW-formerly the California Department of Public Health) drinking water standards. Although the State of California does not regulate domestic well water quality, it is informative for well owners to compare their results to these standards. Results from each focus area are summarized in the table below. The table shows the total number of wells with a chemical above a drinking water standard.

The results summarized in the table above are from wells sampled as part of a voluntary program. Therefore, the results may not reflect the spatial distribution of domestic wells or noted contaminants. For a table that contains statistics on participation by county focus area, please click here.

In May through June, 2011, 79 private domestic wells were sampled in Monterey County. Fifty wells had test results for at least one chemical constituent above a water quality standard. Ten constituents were above a primary maximum contaminant level (MCL) including arsenic, cadmium, fecal coliform, fluoride, nitrate, nitrite, perchlorate, thallium, total coliform, and uranium. Thallium was the most frequently detected above a MCL (18 wells), followed by total coliform (11 wells), nitrate (9 wells), and perchlorate (9 wells).

Seven constituents were detected above a secondary maximum contaminant level (SMCL) including aluminum, iron, manganese, pH, specific conductance, sulfate, and total dissolved solids. Manganese was the most frequently detected constituent above a SMCL (13 wells). Thirteen samples were additionally analyzed for hexavalent chromium and were detected above the MCL in 4 wells.

In 2008 and 2009, approximately 137 domestic wells were sampled in San Diego County. Manganese was observed above the SMCL of 50 µg/L in 45 (33 percent) of the sampled wells. Radionuclides and pesticides were sampled in selected wells, in addition to the standard suite of analytes. Pesticides were not observed above the analytical detection limit in the San Diego study area. Thirty five percent of the 54 wells sampled for radionuclides exceeded the recommended levels of gross alpha activity. 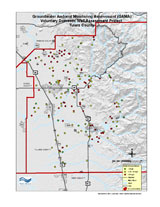 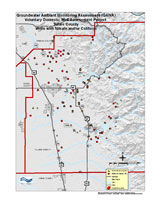